Since we both knew that 5G emphasizes high throughput and low latency. To use 5G capability to the fullest needs a reliable hardware system, which supports the computer-intensive workload from the ground (physical layer). PCIe is the most common interface standard for connecting high-speed components. Almost every motherboard for a computer or embedded system has a number of PCIe slots that product developers can use to add other cards, such as GPUs, RAID cards, Wi-Fi cards, or SSD cards, for expanding the device’s capabilities.

PCIe card refers to a popular network adapter design. It can achieve a series of point-to-point connections via switches to control where the data needs to go. There are four types of PCIe cards, which are of different physical sizes and lanes: x1, x4, x8, x16, and ultra-rare x32. In applications, each type provides different bandwidth. PCIe standards now are in the fifth generation. Normally it is recorded as PCIe 5.0 or PCIe Gen 5.

5G provides higher download speeds, up to 10 gigabits per second (Gbit/s), an extremely low error rate, and higher bandwidth. The latency is around 30ms (edge servers close to towers can reduce to 10-20 ms). To deploy IIoT strategy with edge computing technology needs high-performance server-grade network cards which can support such advantages from 5G era. The faster transfer speeds will be important for applications that include machine learning and artificial intelligence, the data center uses, and high-performance computing environments. This will help A.I. applications process more data at faster speeds.

A server-grade network card is to manage and handle network traffic. It usually requires a faster data transmission speed like 10G, 25G, 40G, or even 100G which is way greater than an ordinary PC network adapter. Plus, server adapters have a low CPU occupancy rate, since it has a special network controller that can take many tasks from the CPU.

How to select a best-fit PCIe Network Card for server uses? Besides recognizing the slot width and version that are supported by the motherboard design, there are some components of a network interface card (NIC) that are needed to consider while designing.

Controller– It is like a mini CPU to process data received and decides the performance of the network adapter.

Boot ROM socket– This is on the card that enables boot ROM capability, increasing security and lowering the cost of hardware.

NIC port for cable/transceiver– For connecting with an Ethernet cable or transceiver directly, to generate & receive the electronic signals putting on the network cable or fiber cable.

Bus interface– On the side of the circuit board for the connection between the NIC & server via being plugged.

Profile bracket– Help users fix the NIC in the expansion slot of a server. 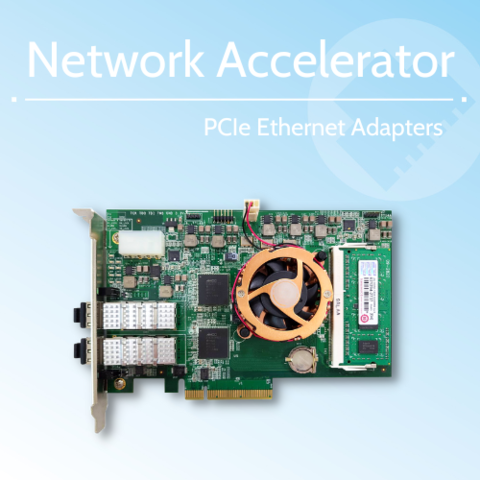 訂閱電子報 Join Our Newsletter
Copyright © 2022 NETIO Technologies | Powered by NETIO Technologies
We use cookies on our website to give you the most relevant experience by remembering your preferences and repeat visits. By clicking “Accept All”, you consent to the use of ALL the cookies. However, you may visit "Cookie Settings" to provide a controlled consent.
Cookie SettingsAccept All
Manage consent

This website uses cookies to improve your experience while you navigate through the website. Out of these, the cookies that are categorized as necessary are stored on your browser as they are essential for the working of basic functionalities of the website. We also use third-party cookies that help us analyze and understand how you use this website. These cookies will be stored in your browser only with your consent. You also have the option to opt-out of these cookies. But opting out of some of these cookies may affect your browsing experience.
SAVE & ACCEPT